Will Blueberry be the first human on Mars? 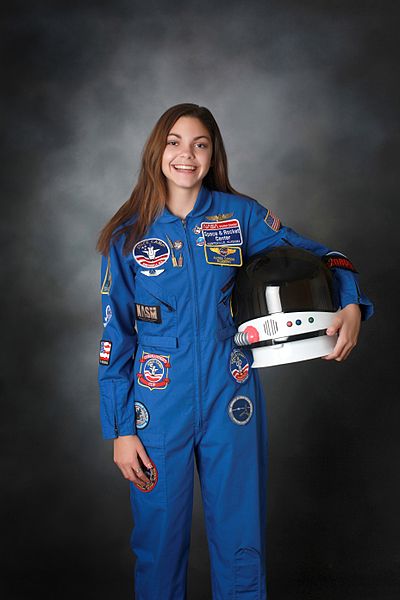 Have you ever heard about Alyssa Carson? Yes…No…Maybe? Well, whatever were your answers in this article I’m going to tell you her fantastic story. Alyssa is a normal 16 years old girl living in Louisiana, she hangs out with her friends, go to the movies, play soccer, does ballet and Girl Scout. As her father said she works hard every day to accomplish her big and ambitious dream: to be an astronaut and to be the first human going to Mars.

Alyssa Carson, also known as Blueberry (her call sign) was born in 10th of March 2001 in Hammond, a city situated in Louisiana, United States.

How did her passion start? One day, when she was three years old, she asked her father, Bert Carson, a question about space and he answered explaining stuffs about the sun, the stars and how human succeeded to the moon and how they are working to go beyond it. He thought that that discussion ended there, but it wasn’t. Later she told him that she wanted to be an astronaut and be one of the humans who will go to Mars. Her father didn’t take that seriously, but one day, when she was 5, he walked into the room and he saw her studying Mars and how humans including her can land on it. From that moment Bert started thinking how he could support his daughter with her big dream. At seven years old she began attending the Space Camp in Huntsville, Alabama where she started blowing people away knowing a lot about space: for this reason she won the highest honor given at Space Camp called the “Right Stuff”.

In twelve years she attended the Space Camp seven times, she attended the Space Academy two times, Sally Ride Camp at MIT and three Sally Ride day Camps, she completed the Robotics Academy, she visited the Mayor Space Centers, she witnessed three Space Shuttle launches, she was invited to attend the Space Camp in Turkey in 2012 and Space Camp Canada in 2013 becoming the first person in the world to attend all three NASA Space Camps, she represented Space Camp during an interview with a British television, she had a Space Camp-commissioned painting of her planting flag on Mars, she delivered motivational speeches to children and she visited all 14 centers in NASA’s Passport to Explore Space Program. What about her future? She would like to have her scuba and skydiving certification and pilot’s license all before she will be 17. She hopes to attend Oxford for undergraduate work, obtaining a Master from the International Space University and then her doctorate from MIT.

“I would love to go to Mars because it is a planet that no one has been before,” Alyssa explains. This could possibly be our next Earth. Just think about all the things that are in Space. For example: planets we have never explored, galaxies that we have never heard of, stars that are just babies, black holes that are as wide as the Sun to Pluto multiple times and has the mass of a billion suns, parts of the universe that we have never seen. Just think of all that stuff just floating around. It’s more than you can imagine.”

And what if Alyssa decides she no longer wants to be an astronaut? “That’s fine,” Bert says, “We’ve had discussions all along about the reality of what becoming an astronaut might mean. The sacrifices, the idea that she may not come back when she gets there, the amount of work she needs to do … If at any time she changes her mind, that’s fine. This is something I’ve never, ever pushed her to do. If she came to me tomorrow and say she don’t want to do it anymore, she won’t do it anymore. But as her parent, I feel it’s my job to help her realize her passion, no matter what that passion is. She pulled me into it rather than me pushing her. There’s something calling her to that planet.”

(Alyssa and her dad’s declarations from astronaut.com web site).

One thought on “Will Blueberry be the first human on Mars?”