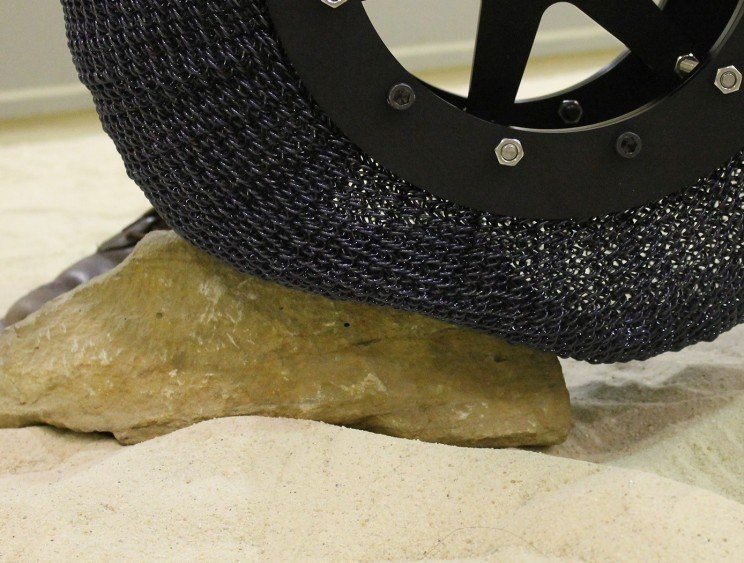 Curiosity is one of NASA’s rover which is exploring Mars: it’s one of the biggest technological successes of the space agency but it has problems with rough surfaces.

The rocky and rough surface of the planet tested really hard the special rover’s tires which are visibly consumed and damaged in certain point.

On June 2017 JPL’s (Jet Propulsion Laboratory) scientists updated the Curiosity’s software which controls traction system that has the goal to extend the useful tires’ life.

Engineers are worried about the holes appeared on the wheels because the sand that could enter there, can cause serious problems to the rover.

For this reason, Glenn Research Center experts of NASA are working to create a new and technological generation of tires that can be used for rovers and space vehicles. From these researches a new wheel was born: it’s called “Superelastic” and it is composed by hundreds of steel strings braided in a flexible net, which can support high loads and adapt to any type of surface without breaking.

The new structure can support any deformation: it has no air chamber, so it will never have holes.

It’s realized with a nickel and titanium alloy; this special tubular metal mesh can undergo deformations of up to 30% more than conventional materials without losing the original shape. This special metal alloy has the unique characteristic to realign the atomic structure after the deformation of the material. And the particular structure of the weave guarantees an optimistic adherence to all surfaces: from sandy to rocky and gravelly. Designers think that the elasticity and the strength of this material are ideal also to realize shield and protection against space debruises to apply to satellite and interplanetary vehicles.
Tests and researches on “Superelastic” are not finished yet and probably it won’t be applicated to the next Martian rover. Engineers hope to apply these new technological tires on the new generation of space vehicles and on the automotive industries to improve security on the road.