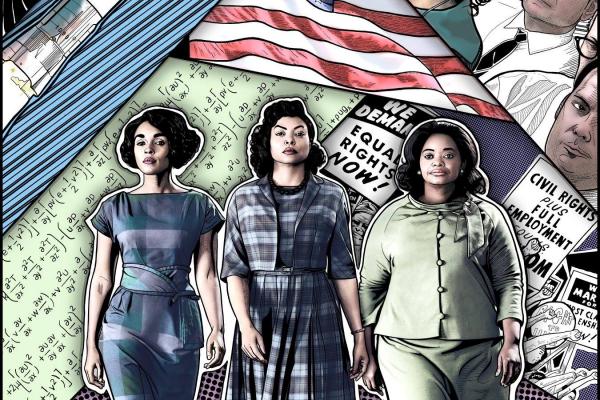 We are in the middle of the cold war when the United States and the Soviet Union were competing the so-called space race. In 1957 the URSS sent in space the first satellite, Sputnik 1; in 1961, they sent Yuri Gagarin, the first man in space and in 1963 Valentina Tereskova was the first woman in space. The US was really at the back, and they needed to accomplish something big to get back on track. NACA (National Advisory Committee for Aeronautics), which later will become NASA, is trying really hard to send an American citizen in space. Still, they couldn’t find any way out; they needed extra help; they needed more brilliant minds.

In the late ‘50s and the ’60, in the United States, the population protested against segregation of Afro-Americans and women inequality in society and they end both of them. In the 60’s Martin Luther King Junior, Civil Rights leader, and Robert Kennedy, the new president of the United States of America, were the two representative figures of these huge changes that occurred in the USA during those years.

During those times, NACA decided to hire Afro-American black women Mathematicians for the role of “computer in skirts.” Why women? Because NACA thought that women would be more careful and patient in finding details.

The protagonists of the movie are three Afro-American women: the Mathematician Katherine Johnson, the inspiring engineer Mary Jackson and their unofficial acting supervisor Dorothy Vaughan. They all work as human computers in the West Area Computers division of the Langley Research Center in Virginia.

These three women (together with their black women colleagues)  had to go through racial and gender discrimination in and outside the workplace: even though that, they became a turning point for John Glenn’s space mission, for the moon landing mission and decisive all the future missions by NASA. With their determination, love for their job, and country, they made it!

Mary Jackson applied for the NASA engineer position: she went through a case court to make her attend classes to obtain the engineering position seeing that it was not allowed to women to participate in the engineering course.

Dorothy Vaughan was promoted to supervise the Programming Department. She asked that also her entire team could get promoted.

Thanks to her Analytic Geometry skills (a course took as extra during college), Katherine Johnson was selected for the fight mechanics branch. Then she moved to the spacecraft control branch, which was responsible for designing space missions and calculating trajectories. John Glenn, before his departure, he asked to make Johnson check the trajectory calculations because he didn’t trust the computers. She also calculated the trajectory for the moon landing and for the return to earth.

Without their contribution, NASA would not exist nowadays.

I don’t want to spoil too much the movie for those of you that didn’t watch the film yet. I just want to make a disclaimer: there are many discrepancies in the timeline and the characters, but these details should not distract you from the important message that the movie wants to transmit: gender and racial (if it does really exist) equality.